Warning: array_keys() expects parameter 1 to be array, bool given in /home/customer/www/dev.anseladams.com/public_html/wp-content/themes/enfold/framework/php/font-management/class-avia-type-fonts.php on line 856

Warning: sort() expects parameter 1 to be array, null given in /home/customer/www/dev.anseladams.com/public_html/wp-content/themes/enfold/framework/php/font-management/class-avia-type-fonts.php on line 857


Ansel Adams, in the beginning

A short Q and A with the author of a new book that explores the little-known early career of one of America’s most celebrated and beloved photographers: Making a Photographer: The Early Work of Ansel Adams. 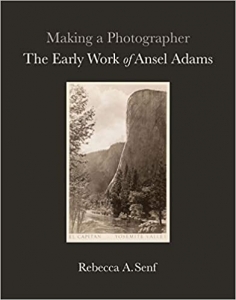 Yale University Press: Your book offers a different perspective on the entire arc of Adams’s career than the one the artist himself carefully constructed during his lifetime. Can you explain the key differences?

Rebecca A. Senf: Adams was most invested in the work he did starting in the 1940s onward, and didn’t see much importance in either his early work or his commercial work. Because he was famous at the end of his life, and surrounded by a fairly substantial staff (some of whom became the writers about his life after he died), he was able to define the narrative about his career and the important moments and bodies of work. As a scholar, I was drawn to his early work: stylistically it’s so different than his mature work and it seemed that there was a story there to be discovered. Ultimately, my book uses examples of his early work to chart the course of his learning how to become the famous photographer we know. He was self-taught and leveraged the experiences and skills of his early projects to develop his signature style. He also incorporated lessons from one of his early commercial jobs, eight years working for the Yosemite Park and Curry Company’s marketing department, into that mature style that defined his approach to wilderness landscapes. I think it’s natural that he didn’t see these influences in his own early career, but I also believe that looking closely at those early experiences helps us understand his career and appreciate the way he built up to his most recognizable photographs….read more